Birmingham in 1850. On the ground reporting of life in the manufacturing metropolis of Victorian Britain. 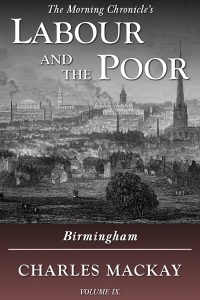 Birmingham in the mid-nineteenth century was a manufacturing powerhouse. Thousands of workshops were turning out a vast range of goods, supplying the nation and the world. Everything from massive steam engines to minute buttons were made here and it was almost a given that if it was made in metal, then it was made in Birmingham.

From the makers of swords, matchetts, and bayonets to the manufacture of fire-arms. From pearl buttons to pens, from workers in glass to workers in brass. From the factory women to the Ragged Schools for their children and the amusements of the people—all this and much more is explored.

The investigation into the working and living conditions of the working class people of Birmingham ran to 21 letters. The first letter was published on October 7th, 1850, the final one on March 10th, 1851.

Charles Mackay was the “Special Correspondent” for The Morning Chronicle tasked with the investigation as part of their “Labour and the Poor” series.

People isn’t getting tired of our performances, but stingier—that’s it. Everybody looks at their money now afore they parts with it, and gennelfolks haggles and cheapens us down to shillings and sixpences, as if they was guineas in the holden time.

— Labour and the Poor Vol. III – The Metropolitan Districts.