Life in 1850. On the ground reporting from the heartlands of the Industrial Revolution. 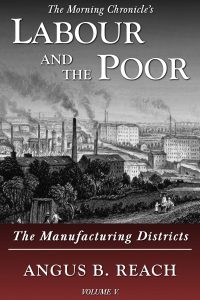 Labour and the Poor Volume V: The Manufacturing Districts

Angus B. Reach’s evocative and beautifully described journey takes us to the heart of industrial Britain, inside the factories, down the mines, and into the homes of the working classes in the Northern and Midland counties of England. He takes us into the mills and cellars of Manchester and on an evening out in this cotton metropolis. We explore laudanum and the drugging of children, go into the homes and mills of the silk weavers, to the Yorkshire woollen factories, the Leeds flax mills, to the mines of Northumberland and Durham and on to the Staffordshire potteries and mines. This and much more.

The north was the great wealth-creating area of the country, fortunes were being made here and the textile manufacture in cotton from the United States and wool from home was clothing the world.

The investigation into the working class people in the manufacturing districts ran to 32 letters. The first letter was published on October 18th, 1849, the final one on February 15th, 1850. Angus B. Reach was the “Special Correspondent” for The Morning Chronicle tasked with the investigation and his first letter was the inaugural one of the entire nationwide “Labour and the Poor” series. He provides fascinating accounts of the people, their living and working conditions, and the manufacturing processes they were involved in.

The in-depth investigation into the manufacturing districts covered:⁠—

Labour and the Poor Volume V: The Manufacturing Districts

Another lad, about 16, clad in a ragged coat, with a dirty face and matted hair, next came forward and said—My father was a soldier, and when I growed up to about ten years I joined the regiment as a drummer in the Grenadier Guards.

— Labour and the Poor Vol. II – The Metropolitan Districts.