Wales in 1850. On the ground reporting from the engine-room of industrial Britain—with personal accounts from the people themselves. 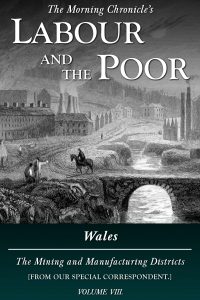 Labour and the Poor Volume VIII: Wales, The Mining and Manufacturing Districts

Fuelling the steam-powered factories and feeding the furnaces of Britain. This was Wales in the mid-nineteenth century, rich in coal, copper, iron-ore, and lead.

From “The Metropolis of the Iron Works”, Merthyr Tydfil, to the copper works of Swansea and the lead mines of the north. This volume will take you into the Welsh towns, into the alleys and courts inhabited by the poor, and underground in the varied and dangerous mines. We discover the domestic and social lives of the workers, pauperism and the education of pauper children, crime, strikes of miners, and the truck system and its effects, giving you a unique picture of Wales in early Victorian times.

The author or “Special Correspondent” for The Morning Chronicle, the identity of whom we have yet to determine, carried out an in-depth investigation into the lives of the working class people of Wales, running to 17 letters in total. The first letter was published on March 4th, 1850, and the last one appeared on April 25th, 1851.

Thieves, prostitutes, vagrants, the idle, the reckless, and the dissolute, here live in a miserable companionship. This neighbourhood formed the main scene of our inquiries; and what I that day saw of misery, degradation, and suffering, I shall remember to the end of my life.